Around this time last year, we published our comprehensive tracker [1] to “capture” just how large the COVID-19 alcohol reform wave really was. We tracked every to-go or delivery alcohol reform that had been enacted since the pandemic began in April 2020 through September 2021. Now, one year later, it’s time for an update [2]. And according to the results, the COVID Booze Wave has only grown larger—it’s now a veritable tsunami.

A Note on Methods

Just like last year’s version, it makes sense to start by clarifying what, exactly, qualifies as a COVID-19 alcohol reform for purposes of our tracker. We are counting any reform enacted from April 2020 until the present that authorizes to-go or delivery alcohol from a restaurant/bar, off-premise retail store (grocery store, liquor store, etc.) or brewery/distillery that will last at least through 2023.

That means, like last time, emergency orders that are set to expire whenever a governor or state regulatory agency declares them so do not count. There are a few other definitional notes from our previous tracker that are worth repeating since they also apply to this update [3]:

A quick note on what the word “delivery” encompasses is also helpful. Some states have passed to-go cocktail laws that merely allow curbside pick-up of drinks from restaurants, not delivery to customers’ homes (these are still counted here since they increase market access for alcohol in a meaningful way compared to the status quo ante). For restaurants, bars, and retail stores, when delivery is involved, the delivery is almost always local delivery via a driver (either an employee of the business or a third-party delivery service). For breweries and distilleries, the form of delivery is often more varied: Either local delivery via a driver or shipments of alcohol made via the mail. We did not include shipments from wineries for these purposes since a vast majority of states have allowed direct-to-consumer wine shipments for several decades (but only a handful allow beer and distilled spirits direct-to-consumer shipments).

As a final note, numerous states previously allowed some types of alcohol delivery—usually from grocery stores—pre-COVID, but would only allow employees of those stores conduct the deliveries, rather than third party delivery services. During COVID, a few states—Louisiana being a prime example—expanded their delivery allowances from retail stores to permit the use of third-party delivery services. Since this was a delivery-enhancing reform that makes delivery more practicable and widely available, it was counted here.

Last year, we calculated that 32 out of 50 states had enacted at least some type of to-go or delivery alcohol reform since COVID-19 started. One year later, it’s now up to 40 states (counting D.C.) that have passed a reform extending or making permanent to-go or delivery alcohol in some way. The fact that, in the span of just over two years, 80 percent of U.S. states have expanded alcohol delivery makes for one of the most dramatic policy transformations in modern American history. To break this down by type of reform, the following graph shows the number of reforms in each category: to-go/delivery from restaurants or bars, delivery from grocery or liquor stores, and delivery from breweries or distilleries. 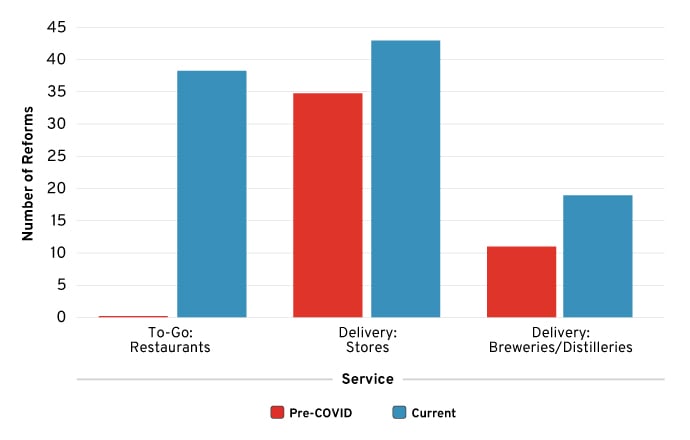 To-Go/Delivery From Restaurants and Bars

To-go/delivery cocktails continue to show the most immense change from the pre-COVID-19 status quo to today. (Note: We are using the term “to-go cocktails” for this category, although some of the enacted reforms only allow for to-go beer/wine and not mixed beverages like cocktails—see data spreadsheet at bottom of post for state-specific breakdowns).

At the dawn of 2020, just before the pandemic started, no state in America had passed legislation authorizing to-go or delivery alcohol from restaurants. Just under 30 months later, 38 states have passed reforms that either make to-go/delivery cocktails permanent or extend them to 2023. A before vs. after map best illustrates the immensity of this shift: Of these 38 states, 24 made to-go/delivery cocktails permanent, while the rest extended them to 2023 or beyond. Additionally, 29 of these to-go/delivery laws permit delivery in addition to just curbside/takeout drinks, while the rest just allow curbside/takeout. In terms of who can conduct the deliveries in states which they are allowed, nine of the 38 states only permit employees of restaurants or bars to conduct deliveries; the rest, a vast majority, allow the use of third-party delivery services.

Since last year’s update, there has been less movement in the expansion of states allowing alcohol delivery from off-premises retailers such as grocery or liquor stores. An important qualification, however, is that many more states allowed delivery from these stores prior to the pandemic.

As seen in the graph above, 35 states allowed “off-prem” delivery before COVID-19, and today that number has ticked up to 43. Since last year, Nevada was the one state that flipped into the “yes” column for off-prem delivery.

The legislation that passed in Nevada requires local jurisdictional approval for such deliveries, meaning that the state is still a bit of a patchwork when it comes to off-prem delivery. Importantly, however, Nevada is in the process of issuing a rulemaking stemming from that legislative victory that will likely encourage more jurisdictions to green-light off-prem delivery officially. New Jersey also saw a recent off-prem delivery reform—expanding third-party delivery to liquor stores in addition to beer/wine from grocery stores. The remaining holdout states that completely prohibit off-prem alcohol delivery are Delaware, Kansas, Montana, North Dakota, South Carolina, South Dakota, Utah and Wisconsin. While several of these states are “red” states in that they lean right politically, the presence of deep-blue Delaware and purple Wisconsin underscore the fact that resistance to alcohol reforms rarely adheres to clean ideological lines.

It’s also worth noting that six of the states allowing off-prem delivery only permit employees of the liquor store or grocery to conduct the deliveries; the remaining—again, a vast majority—allow the use of third-party delivery services. (Colorado, one of the six states that currently only allows employee deliveries, will have an initiative on the ballot this November that, if approved, would permit third-party deliveries in the state).

Delivery From Breweries and Distilleries

Delivery from alcohol producers, such as breweries and distilleries, is a more nuanced issue than delivery from retailers like restaurants or stores. As discussed in our original tracker:

Direct delivery from producers of alcohol to consumers is the most nuanced and tricky category to track. This is because both the type of delivery can vary (local delivery via driver vs. shipping via the mail) as well as the type of alcoholic beverage being delivered (wine vs. beer vs. distilled spirits). A further nuance are deliveries that travel across state lines (i.e., interstate) versus those that stay within the borders of a single state (i.e., intrastate).

For the purpose of this tracker, we are including any reform that allows breweries or distilleries to ship their products in the mail or to deliver locally via a driver. (As with our original tracker, we are not including wineries at all since the vast majority of states already allowed wineries to ship wine pre-COVID-19). Overall, 14 states have now passed some type of pro-delivery or pro-shipping reform for breweries or distilleries since the pandemic began. Only one of these reforms occurred since last year, and that was Maine’s passage of its to-go/delivery cocktail law that applied not only to restaurants/bars but also to distilleries in the state. Countering Maine’s pro-delivery reform was Nevada’s decision to repeal its law (enacted pre-COVID-19) allowing in-state distilleries to ship their products directly to consumers. Curiously, this ban on in-state distillery shipping was part of the same legislation that expanded off-prem alcohol delivery from stores in Nevada (discussed in previous section).

Where We are Today

At the conclusion of our original tracker, we posited that America has officially entered a “new normal” when it comes to how its citizens buy and access alcohol. We also argued that “COVID will be remembered as a once-in-a-century shakeup for American alcohol markets.”

One year later, the evidence [5] for this has only grown stronger, with the COVID Booze Wave turning into a tsunami. Since April 2020, 80 percent of American states have expanded (either permanently or through 2023) their to-go/delivery alcohol rules. In a time when Americans are more divided than ever—and the gap between red and blue states feels almost unbridgeable—alcohol is still one of the ties that bind us.

As we noted last year:

Tracking and analyzing alcohol reform efforts across all 50 states is an effort inherently fraught with uncertainty. After months of seeming inaction, legislative changes can happen suddenly and unexpectedly—and often attract little attention, particularly in an era of hollowed-out local media coverage. Further, legislation is often written in unclear and ambiguous terms, adding yet more uncertainty to the process.

We therefore decided that, in the interest of accessibility and as a public service, it would be worthwhile to include the underlying data we compiled and publish that as well. That way, industry stakeholders and even the public at large can take a deeper dive into this topic and flag new developments as they happen (if you flag them for us, we can make tweaks and updates to what we’ve posted here).

In that vein, we are once again including the below spreadsheet that summarizes our findings and includes specific bill numbers for each alcohol reform we tracked and analyzed.