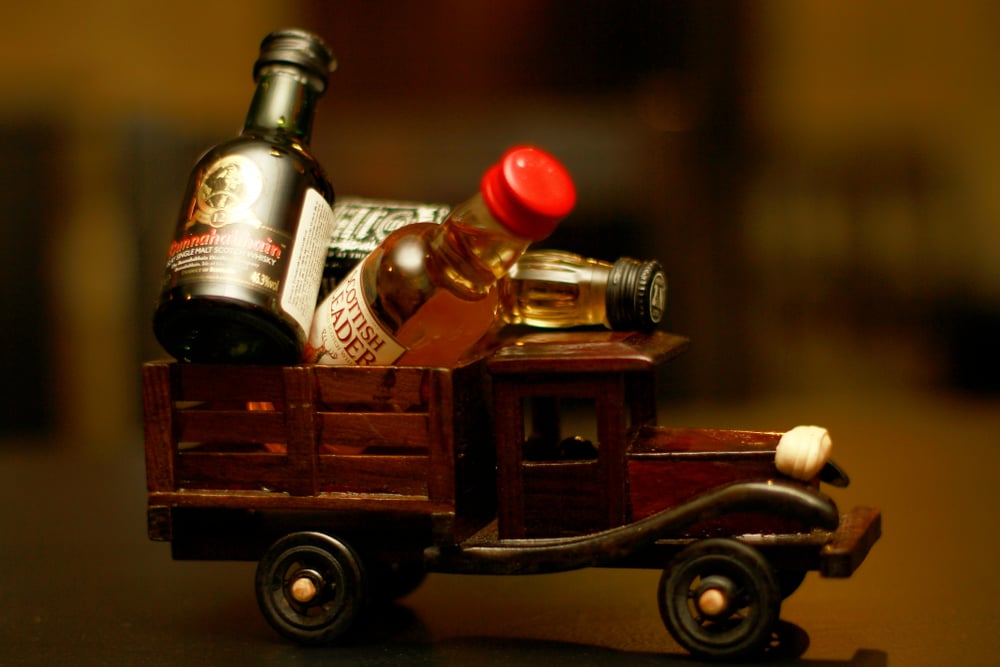 The Truth About Alcohol Delivery and Underage Drinking

The COVID-19 global pandemic has led to a broad re-thinking of American alcoholic beverage laws. That’s because, in a time of lockdowns, more and more consumers transitioned to a delivery-based model of purchasing daily household products. In doing so, they were naturally interested in having a six-pack of beer or a bottle of their favorite whiskey delivered to their homes.

During COVID-19, states like Kentucky passed [1] comprehensive reforms to allow distillers and brewers to deliver their products directly to consumers—a practice which is known as Direct-to-Consumer [2] (DtC) shipping. DtC has long been practiced in the American wine industry—the vast majority [3] of states allow wineries to deliver bottles to their customers’ homes—but it is much rarer in the brewing and distilling industry. All told, only a small handful [4] of states permit breweries and distilleries to engage in DtC shipments.

And certain influential interest groups want to keep it that way. A new survey [5] by alcohol wholesalers blares a warning that American mothers are “concerned” that reforms like DtC delivery could be a gateway to more kids getting their hands on alcohol. Scary warnings aside, the empirical evidence on this topic is clear: There is no consistent correlation [6] between DtC delivery and underage drinking.

To understand the dynamics at play, it’s important to break down how the alcohol industry works. The system predominantly operates under what is known as the three-tier system [7], which requires legal separation between producers, wholesalers and retailers of alcohol.

The three-tier system impacts the alcohol supply chain in myriad ways, but it makes it more difficult for businesses like breweries and distilleries to sell and deliver their products straight to consumers. Instead, they have to route those products through a wholesaler and then a retailer—only then can they be sold to the customer. If this sounds anachronistic in modern day America, that’s because it is: It would be analogous to Apple only being allowed to sell its products at a store like Best Buy, rather than also being able to sell directly from the online Apple Store.

The three-tier system traces its roots [8] to the immediate aftermath of Prohibition, and—unsurprisingly for a system that has been around for so long—it has created significant reliance interests. Namely, alcohol wholesalers and retailers are often leery of reforms like DtC shipments, since those delivery models circumvent the three-tier model by allowing producers to sell straight to consumers.

While this type of resistance is an unremarkable, albeit unfortunate, example of economic protectionism, it rarely manifests itself in these terms. Instead, opponents of reforms like DtC argue that the real dangers of producers being able to ship their products straight to consumers are potential health and societal harms.

One of the most-repeated arguments by opponents is that reforms like DtC could lead to more underage individuals gaining access [9] to alcohol. These worries, while understandable, are devoid of significant data to support them. Perhaps in an attempt to adduce such evidence, a recent survey [10] conducted on behalf of the Wine and Spirits Wholesalers of America (WSWA) features an eye-catching headline: “New WSWA Study Finds U.S. Mothers Concerned that Direct-to-Consumer Spirits Shipping Endangers Children.”

When one digs down into the details, however, there is less to these purported findings than meets the eye.

For one, the survey framing likely influenced the results. The survey methodology included polling 2,000 mothers nationwide via online interviews. An additional 600 mothers were surveyed in New York and Texas, because both states are scheduled to consider pending DtC reform bills in upcoming legislative sessions. Why only mothers, and not fathers, were sampled in the survey is a curiosity that goes unexplained.

These mothers were asked to agree or disagree with broad questions, like if it was “important for lawmakers to consider [preventing underage alcohol access] when deciding alcohol laws and regulations like DtC spirits shipping privileges?” Over 90 percent of mothers answered in the affirmative. Another question asked the mothers if they were “concerned” that DtC shipping of spirits “will lead to underage access?” Over 70 percent answered in the affirmative.

In order to qualify as a mother who thought it was “important” for lawmakers to consider underage alcohol access when deciding issues like DtC shipping, the respondent had to think it was either “somewhat important” or “extremely important.” Similarly, a mother “concerned” that DtC would lead to more underage access was one who was either “somewhat concerned” or “extremely concerned.”

Needless to say, it does not take a PhD in polling data to see the inherent limits of this type of questioning: Ask any parent if they are at least “somewhat concerned” about pretty much any topic that could affect their children’s lives, and you’ll likely get a chorus of head-nods and affirmations. “Are you at least somewhat concerned your child might get lost at the zoo on the field trip?” “Are you at least somewhat concerned your kid might be exposed to drugs at an after-school party?” Pretty much every parent has fears about their children, which makes affirmative responses about those fears fairly unremarkable.

To be clear, being concerned about your child’s well-being is an extremely rational impulse for any parent. But when it comes to determining public policy questions, good empirical data, rather than survey results about “concern” levels, is still the best guide.

The survey also portrays completely non-controversial sentiments by mothers as somehow indicative of opposition to DtC delivery in all forms. For instance, few rationale observers—even those most in favor of DtC delivery—would dispute that it is “important” for lawmakers to consider underage drinking when analyzing DtC reforms. Of course, taking something into account while developing smart reforms is far different from rejecting a reform outright—a distinction that gets lost in the way the survey was administered.

In a follow-up post [11], the WSWA did attempt to cite to an actual empirical study on underage access and alcohol delivery. According to that study, 45 percent of alcohol orders by underage buyers were successfully received during the course of the study. Once again, though, there are clear limitations to this data.

First, this study [12] suffered from a severely limited sample size, both numerically and geographically: It involved a mere eight buyers, all located in North Carolina, who placed a grand total of 100 alcohol orders over a two-week period. Additionally, the study is now over a decade old and apparently was never expanded beyond these original constraints.

Attempting to base widescale public policy decisions on the experience of eight people, all located in one locale, is risky and unnecessary given that better data on the history of alcohol shipments exists, as discussed below.

The Facts About Underage Drinking and DtC Reforms

Fortunately, such data exists. Earlier this year, the R Street Institute published an empirical study [13]: “Alcohol Delivery and Underage Drinking: Data-Driven Lessons from Direct-to-Consumer Wine Shipping.” This research was based on a simple concept—since DtC wine shipping has existed for decades in America, it is a relatively straightforward endeavor to evaluate empirically whether such shipments led to a rise in underage drinking over that time.

As noted, DtC shipping for beer and spirits remain less widespread across America, but over 45 states currently allow some form [14] of DtC wine shipments. The trend toward DtC wine has developed over the past few decades [15], providing ample opportunity to measure its effects.

We used data from the Center for Disease Control’s long-standing Youth Risk Behavior Surveillance System [16] (YRBSS) survey. For decades, the YRBSS has asked high school students whether they currently drink alcohol, defined as consuming at least one alcoholic drink in the past 30 days.

It should be noted that asking a respondent a simple “yes” or “no” factual question—as in, did you or did you not have a drink within the past 30 days?—produces a more specific, objectively quantifiable answer than inquiring into a respondent’s subjective “concern level” about a certain topic. To conceptualize this, consider the difference between asking a respondent “Are you concerned about high gas prices?” versus “Did you vote for candidate X on November 8?” The prior question involves a subjective value judgment—i.e., how important are higher gas prices to me and how much do I care about this issue?—versus the objective “yes” or “no” factual answer for the latter.

It’s important to note that underage drinking has declined [18] precipitously across America over the past few decades. From 1991 to 2019, the number of high school students who drank fell from 50 percent to 29 percent. While every state saw a decline in its underage drinking rates in recent decades, our research was able to determine if the extent of those declines were impacted by a state’s laws on DtC wine shipping.

Our research produced the following conclusions [19]:

Put another way, there is no empirical evidence to suggest that states that legalized DtC wine shipments over the past few decades saw greater levels of underage drinking.

Given that there is an overall lack of evidence that allowing alcohol to be shipped directly to consumers’ homes has led to more underage drinking, the focus [20] for policymakers should be on continuing to emphasize proper IDing protocol and training of delivery personnel—tools which can ensure that alcohol is delivered in a safe and responsible manner.

Rather than relying on surveys attempting to gauge a respondent’s subjective “concern” about whether an issue is “important” to them, policymakers should look to hard data. The history of DtC shipping in America provides an ample empirical paper trail to show that DtC does not increase underage drinking.