The bills for the Biden administration’s multi-trillion dollar American Jobs and American Families plans are expected to be footed by additional revenues generated by The Made in America Tax Plan [1]. A headline feature of the plan raises income taxes on the highest-earning American families, the 1.8 percent of households [2] earning over $400,000 per year. Taxes on the remaining 98.2 percent middle class and poor American families would be unaffected—right? Wrong. A poorly-understood feature of the Biden plan penalizes the global reinsurance industry, which would make property insurance more expensive, especially for homes and businesses in Florida, where premiums are already rising steeply. The plan functionally introduces what may be viewed as a “hurricane tax:” raising corporate taxes and introducing new rules impacts international financial transactions, which increases the cost of reinsurance and adversely impacts primary insurers and buyers of homeowner’s insurance, especially in catastrophe-prone areas. Insurers and their customers should be concerned because homeowners in states like Florida are already seeing rate-driven double-digit premium increases.

The main way the Made in America Tax Plan impacts global reinsurance is through its proposed replacement of the Base Erosion and Anti-Abuse Tax (BEAT) with Stopping Harmful Inversions and Ending Low-Tax Developments (SHIELD). BEAT, a provision of the 2017 Tax Cuts and Jobs Act, was intended to generate close to $4 billion [3]/year in additional tax revenue by, among other things, imposing a 10 percent (rising to 12.5 percent in 2026) tax on reinsurance cessions by U.S. insurers to affiliated offshore entities. BEAT has been recognized as a failure. The Made in America Tax Plan states [4] that BEAT has been “largely ineffective at curtailing profit shifting by multinational corporations.” In 2018, the first year BEAT was in effect, it generated revenues of $1.8 billion, half of the Treasury’s expectations.

BEAT failed to meet its expected revenue targets because, rather than be subject to BEAT’s 10 percent tax, insurers responded in two ways: they reduced cessions to affiliated offshore entities while increasing cessions to non-affiliated reinsurers; and they increased their retentions in the United States.

The chart below shows that in 2018, the first year BEAT took effect, cessions to affiliated offshore reinsurers plummeted while cessions to unaffiliated insurers skyrocketed. 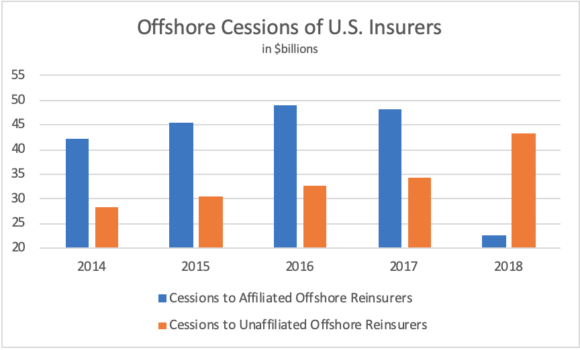 2018 also saw an increase in the net-to-direct premium ratio for the property and casualty industry, indicating that insurers retained more risk in the United States than in foreign jurisdictions, as shown in the chart below. The net-to-direct ratio rose from just under 87 percent in 2016 and 2017 to over 91 percent in 2018. The combination of these two responses enabled U.S. insurers to beat BEAT. 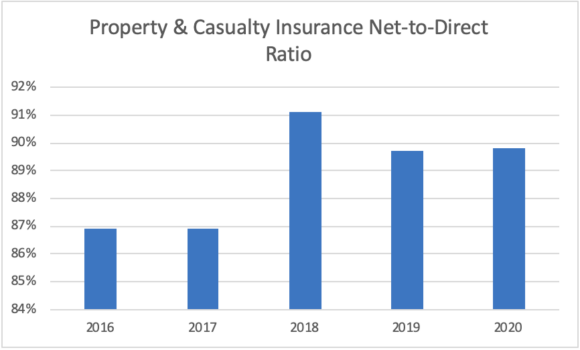 The Made in America Tax Plan replaces BEAT with SHIELD, which introduces a global minimum tax rate. The initially proposed SHIELD rate of 21 percent was whittled down to 15 percent in late May. SHIELD is conceived as a more potent way to shift profits to low-tax jurisdictions. What is more, it would attempt to incentivize other countries to adopt higher minimum corporate taxes. Such a policy could erect a barrier to prevent companies from “inverting,” whereby a U.S. company merges with a foreign company to reduce its effective tax rate. Burger King [6] and Coca-Cola [7] are examples of companies that inverted.

The imposition of a global minimum tax is expected to have negative effects [8] on all multinationals, including global reinsurers. Adverse impacts on reinsurers will lead to higher reinsurance rates, which will be passed on to primary insurers and insurance buyers for reasons unrelated to loss. There are many unknowns surrounding SHIELD, whose contours and numbers require elucidation. Implementation of SHIELD will require not only U.S. congressional approval, but also international agreement insofar as a global minimum tax would be introduced. Clarification of details involving SHIELD and other provisions of the Made in America Tax Plan that could impact global reinsurance were expected to be provided in the Treasury Department’s “Green Book,” which provides explanations of the Administration’s Revenue Proposals. The latest Green Book [9], released on May 28, is not entirely clear on how exactly SHIELD would operate. Because reinsurance is by its nature a global business and SHIELD’s target is multinational companies, insurers need to pay close attention to the plan and push back where appropriate, lest they be put in the position of absorbing additional burdensome taxes they will have to pass on to their customers.

Florida policyholders already pay the highest rates in the country for homeowners’ insurance. Premiums for homeowner insurance from the top 25 Florida homeowners’ insurers average $1,774 [10]. Rates are rising from factors unrelated to changing reinsurance costs. For example, the Florida Office of Insurance Regulation (FLOIR) approved two residential homeowners rate increases in 2020—a 12.4 percent rate increase effective in May and an additional 7.0 percent in December. If representative, these rates would drive average Florida homeowners’ premium to $2,134. Reinsurance accounts for a significant component of Florida homeowners’ premium—about a third. Should the Biden plan be implemented, its SHIELD-related provisions will drive reinsurers to raise rates for insurers, who in turn will pass on the increase to homeowners, rendering Florida insurance costs exorbitant, exacerbating the already-near-crisis conditions in Florida’s insurance market. So make no mistake about it—the Biden tax plan will hit middle and lower class Americans in the pocketbook. In the interest of Floridians and their insurers, we should oppose the Biden Made in America Tax Plan.