This is the third in a series of posts on the subject. Scroll to the end to see the most recent posts in the series.

The City of St. Louis, Mo., is known for manufacturing industries, the Gateway Arch and baseball. As the second largest city in Missouri, St. Louis is home to approximately 300,000 [9] people. The St. Louis Metropolitan Police Department [10] covers 62 [11] square miles.

Disclaimer: The St. Louis Metropolitan Police Department changed their data collection system [12] from the Uniform Crime Reporting (UCR) to the National Incident Based Reporting System (NIBRS) in 2021, which could have affected some of the numbers reported in 2021.

From 2016 to 2021, property crimes [13] in St. Louis saw an overall decrease. Violent crime remained fairly consistent over the six-year period with a significant decrease in 2021. St. Louis’s average daily jail population [14] has been falling since 2016. Using data collected by the Missouri State Highway Patrol, the chart below shows trends from the St. Louis Metropolitan Police Division.

Murder [15] rates have had spikes and valleys over the last six years—increasing in 2017, decreasing in 2018, increasing in 2019 and 2020, and then decreasing in 2021. Notably, law enforcement classified a much larger number of killings in 2021 as justified [16] than they did in previous years; however, even including these justified killings, the murder rate still declined from 2020. Rapes, robberies and burglaries hit a peak in 2017 and 2018 and then consistently fell through 2021. Similarly, larceny has fallen since its peak in 2016, but saw a slight increase in 2021 from 2020. Conversely, assaults and motor vehicle thefts were at a low in 2016, followed by a significant increase through 2021. The chart below depicts these trends using data from the St. Louis Metropolitan Police Division. Missouri has enacted a few reform measures such as bill HB192 [17], which changes some mandatory minimums for habitual offenders and bill SB5 [18], which limits confinement for minor traffic violations following the killing of Michael Brown by a Ferguson, Mo. police officer during a traffic stop. St. Louis has also worked to implement local reforms such as a drug court [19], prosecutorial [20] diversion [21] and “Cure Violence [22],” a program designed to stop the spread of violence. In April 2022, the City of St Louis worked with the Center for Policing Equity to conduct a comprehensive assessment and provided several recommendations in their Reimagining Public Safety in the City of St. Louis: A Vision for Change [23] report. Below, we have highlighted three already-implemented St. Louis criminal justice reform initiatives that help reduce jail populations. 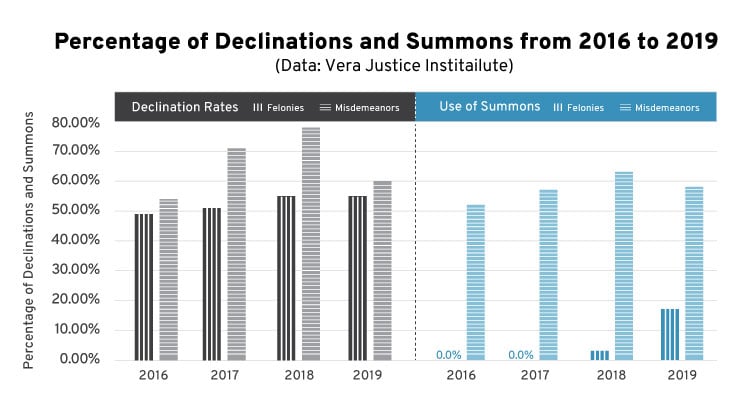 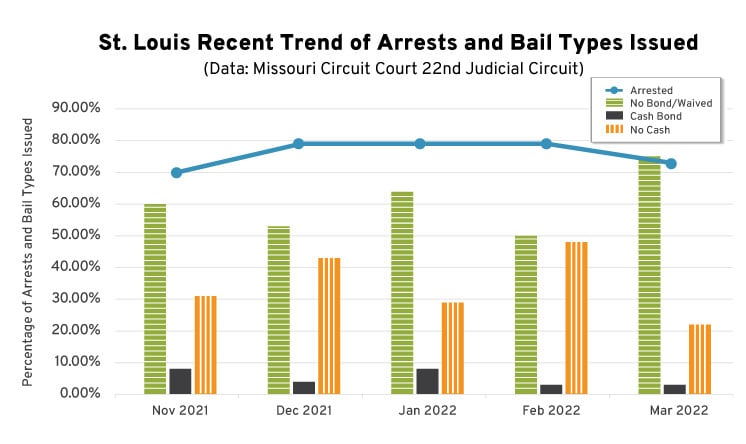 The results of a January 2022 poll [46] showed bipartisan support for criminal justice reforms. It appears that St. Louis and the Circuit Attorney’s Office have taken (and continue to take) steps to provide more mental health crisis support and reduce jail populations. Some of these initiatives [47] can reduce repeat calls, increase public safety and save taxpayer dollars. However, the high level of arrests being declined for prosecution and the only diversion programs being offered post-arrest may subject individuals to the negative impacts of incarceration with limited-to-no support and resources. The state has been slower to take any action on other reforms like expanding citation authority or codifying bail reform. Instead, the state has made other policy changes—such as repealing the requirement for gun permits—that others have attributed [48] to a rise in crime.

Just seven years ago [49], St. Louis was jailing people at twice the rate of the national average, imprisoning people at nearly three times the average rate, and experiencing the most homicides [50] per capita of any large city. It is clear that the “tough-on-crime” approach was not working.

The data evaluated in this paper shows that the implementation of local reforms did not result in an increase in violent crimes (including murders, rapes, robberies and assaults) or in burglaries and thefts in St. Louis. Rather, if St. Louis implements recommended reforms—such as pre-arrest diversion strategies—or makes current efforts more robust, outcomes could actually improve. However, there is a question as to whether reform efforts (as implemented) could be related to an increase in motor vehicle thefts.

Over the last two years, rapes, robberies and burglaries declined significantly. In fact, rapes and robberies reduced by more than 50 percent in 2021 from highs within a six-year period, and burglaries by 42 percent. While larceny did not see as significant of a decrease, the crime rate has been on a downward trend, reaching a six-year low in 2021. Given these statistics, it is reasonable to conclude that these crimes could not have increased due to reform efforts during that period of time.

Motor vehicle thefts fell from a high in 2016 for two years, but gradually increased from 2018 until they hit a six-year high in 2021. These trends do appear to correspond with bail reform, prosecutorial declination of felony charges, the higher issuance of felony summonses and crisis intervention efforts. Research indicates that the declination of charges, summonses and release without monetary conditions are not generally employed in motor vehicle theft cases. However, this relationship needs to be further explored to identify whether individuals committing motor vehicle thefts had pending charges at the time or had charges recently declined against them.

St. Louis would benefit from analyzing the data to determine whether their efforts are having their intended effect. St. Louis should also look to implement or grow supervision, support and services to individuals released pretrial or through other diversion options.

This post will be updated with links to each part in the series.